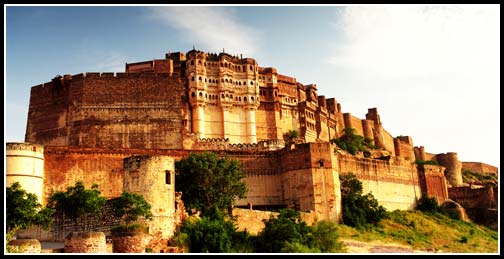 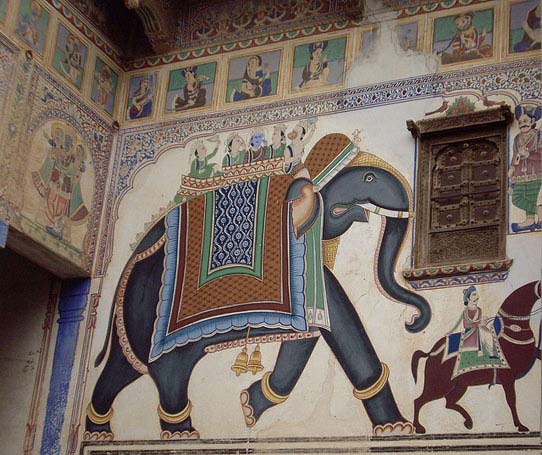 Day 2: Delhi to Mandawa (6h drive)
In the morning you will be transferred by road to Mandawa, which is part of the Shekhawati region. Mandawa is a typical and quiet town, which is perfect to give a first taste of Rajasthan. Here you can have a walking tour of the old havelies (and their lavishly painted walls) belonging to some of the richest business families of India, such as the Hanuman Prasad Goenka Haveli, the Saraf haveli or the Murmuria Haveli. You can also visit the Mandawa Fort, founded in the 18th century by Thakur Nawal Singh, showing many paintings of Lord Krishna and his cows. Overnight in Mandawa. 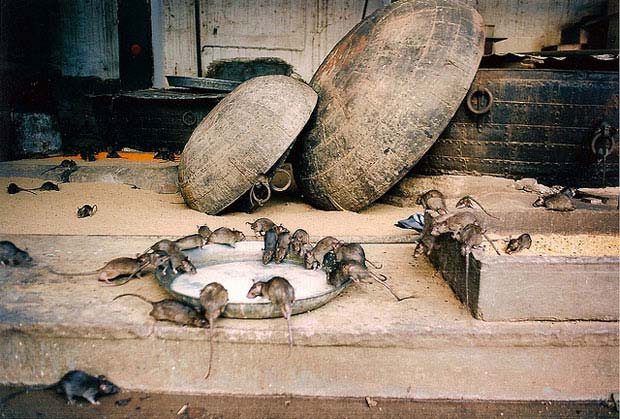 Day 3: Mandawa to Bikaner (4h drive)
Today your driver will take you to Bikaner. In the afternoon we will visit Junagarh Fort, which was built by Rai Singh between 1588 and 1593. It has a 986-metre-long wall with 37 bastions. You will also visit Deshnok (a small village situated 32 km south from Bikaner), whose greatest attraction is the temple of Shri karnimata also known as "Rat Temple". Back in Bikaner, you can admire the beautiful Laxmi Niwas Palace, that has now been transformed in a sumptuous luxury hotel. It used to be the residential palace built by Maharajah Ganga Singh, the ruler of the former state of Bikaner. Overnight in Bikaner. 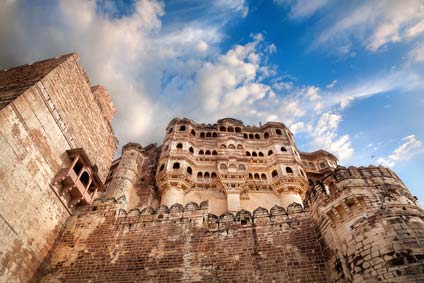 Day 4: Bikaner to Jodhpur (5h drive)
Today we will drive to the "blue city" of Jodhpur (the nickname comes from the the vivid blue-painted houses around the Mehrangarh Fort). On the way, we will stop at the Pokaran Fort, a citadel from the 14th century built by the clan of the Rathores, and off the beaten tracks. Once in Jodhpur (the second largest city of Rajasthan), you can discover the old city center and its Clock Tower bazaar. We will also take you to see the Umaid Bhawan Palace, home of the current Maharaja of Jodhpur that you may see driver in his cabriolet. In 2013 Jodhpur topped the Lonely Planet's list of most extraordinary places to stay. Overnight in Jodhpur. 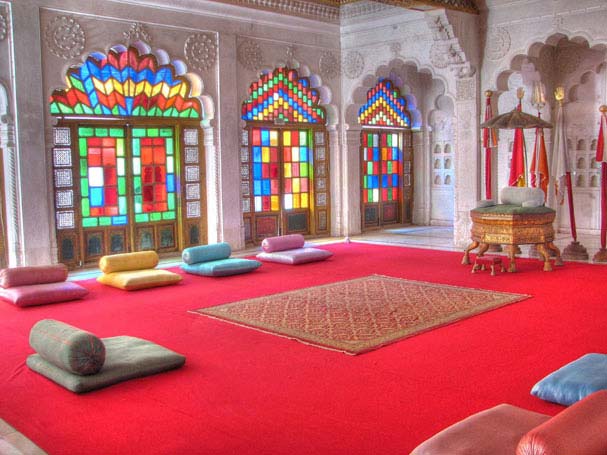 Day 5: Jodhpur City Tour
On this morning you will be taken to and visit the Mehrangarh Fort situated on a low sandstone hill, more than 12 meters high, impressively watching over the entire city. The Mehrangarh Fort is one of the largest forts in India and was built in 1460 by Rao Jodha. Inside the fort visit the many Palaces, beautifully decorated by impressive carvings, such as the Moti-Mahal and the Phool Mahal. Also visit Jaswant Thada, an imposing marble cenotaph built in memory of indian Maharaja Jaswant Singh in 1899, located close to the Meharangarh Fort. Overnight in Jodhpur.

Day 6: Jodhpur to Jaipur (7h drive)
In the morning you will leave for the pink city of Jaipur, capital of Rajasthan state. On the way, you will visit Ajmer, and its Taragarh Fort (one of the oldest hill forts in India and in the world). Then arrive in Pushkar, a small relaxing Indian town, with a central lake surrounded by ghats. Just sit down and watch Hindu people washing and bathing. You can also visit the unique Brahma temple built in the 14th century (this is one of the very few Brahma temples in the world). Then continue your journey to Jaipur. At your arrival, discover the beautiful Jal Mahal. The palace (literally 'Water Palace') is located in the middle of the Man Sagar Lake. The postcard view becomes particularly romantic at sunset, when the Palace lights up and seems to float in the air. In the evening you can enjoy a unique cinema experience or a world famous Indian ayurvedic massage. Overnight in Jaipur. Overnight in Jaipur.

Day 7: Jaipur city tour
In and around Jaipur your driver will take you to visit: Amber fort that was built by Raja Man Singh I, the old town and its monuments, Birla Mandir (a Hindu temple located at the foot of Moti Dungri fort), the Palace of Winds (in the shape of the crown of Krishna, which 953 small windows allowed women to watch everyday life and processions without being seen), the City Palace (the palace complex that includes the Chandra Mahal and Mubarak Mahal palaces and other buildings, was built in 1732 )... In the afternoon, you will visit Galtaji. The ancient Hindu pilgrimage site consists in a series of temples built on the hills that surround Jaipur .Overnight in Jaipur.

Day 8: Jaipur to Agra (5h drive)
On the way to Agra you will stop first at the stepwells in Abhaneri. Thought the village is nealry abondonned, the location is famous for its 'Baoris' (step wells which were invented by the natives to collect rain water). You will visit Chand Baori, one of the largest and deepest wells in India. Then you will visit Fatehpur Sikri, the deserted red sandstone city built by the Mughal Emperor Akbar. Fatehpur Sikri was the capital of the Mughal empire from 1571 to 1585. It was abandoned shortly after its completion, due to lack of water and the proximity with enemies. Then continue your journey to Agra. Rest of the day is free at your leisure in Agra. Overnight in Agra.

Day 9: Agra to Delhi (3-4h drive)
Start the day off by visiting the famous Taj Mahal during sunrise. It is the Indian symbol of love built by Emperor Shah Jahan in memory of his wife Mumtaz Mahal. Next, you will visit the Agra fort (a UNESCO World Heritage site) built by the great Emperor Akbar. Existing since the 11th century, the Fort was expanded by the Mughals and contains several buildings such as the Hall of Public Audience and also several gate (the Delhi Gate and the Lahore Gate being the most famous). You will also visit the Sikandra Fort before driving to Delhi. Overnight in Delhi.

Day 10: Delhi city Tour & Transfer to Airport
According to your flight schedule, your driver will take you to visit the Red Fort (the large red-colored fort was the residence of the Mughal emperors for nearly 2 centuries, and offers several strucutures that you will visit inside the main building - closed on Mondays), the nearby great Jama Masjid Mosque (built by Mughal emperor Shah Jahan between 1644 and 1656, it is one of the largest Mosques in India), the Chandni Chowk market (one of the oldest and busiest markets in old Delhi), QutbMinar (the 72 meter high monument) and more depending on your interests as you can decide with your driver who knows very well is home town. In the evening we will take you to your hotel, or according to your flight time, to the airport for departure and say you goodbye.

Pricing for 3 persons based on a triple room.
Pricing for Luxury Accommodation includes a high-end Toyota Innova car.
Pricing for more than 3 persons upon request based on your requirements (number of rooms/cars)