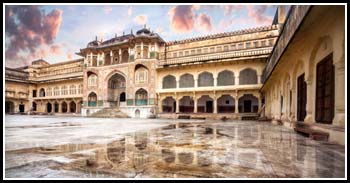 Explore Rajasthan's Golden triangle and discover the cities of Delhi, Jaipur and Agra in a 7-day/6-night tour

Day 2: Delhi to Agra (3-4h drive)
In the morning your driver will transfer you by road to Agra. There you will first visit the Agra fort built by the great Emperor Akbar. Existing since the 11th century, the Fort was expanded by the Mughals and contains several buildings such as the Hall of Public Audience and also several gate (the Delhi Gate and the Lahore Gate being the most famous). You will also visit the Sikandra Fort. Then, by later afternoon until sunset you will visit the famous Taj Mahal. It is the Indian symbol of love built by Emperor Shah Jahan in memory of his wife Mumtaz Mahal. Overnight in Agra.

Day 3: Agra to Jaipur (4h drive)
On the way to Jaipur, your driver will stop at Fatehpur Sikri, the deserted red sandstone city built by the Mughal Emperor Akbar. Fatehpur Sikri was the capital of the Mughal empire from 1571 to 1585. It was abandoned shortly after its completion, due to lack of water and the proximity with enemies. Then you will stop at the stepwells in Abhaneri. Thought the Indian village is nealry abondonned, the location is famous for its 'Baoris' (step wells which were invented by the natives to collect rain water). You will visit Chand Baori, one of the largest and deepest wells in India. Then continue your journey with your driver to Jaipur. Late afternoon you can enjoy a unique Indian cinema experience or a world famous ayurvedic massage.. Overnight in Jaipur.

Day 4: Jaipur City Tour
In and around Jaipur your driver will take you to visit: Amber fort that was built by Raja Man Singh I, the old town and its monuments, Birla Mandir (a Hindu temple located at the foot of Moti Dungri fort), the Palace of Winds (in the shape of the crown of Krishna, which 953 small windows allowed women to watch everyday life and processions without being seen), the City Palace (the Indian palace complex that includes the Chandra Mahal and Mubarak Mahal palaces and other buildings, was built in 1732 )... In the afternoon, you will visit Galtaji. The ancient Hindu pilgrimage site consists in a series of temples built on the hills that surround Jaipur .Overnight in Jaipur. 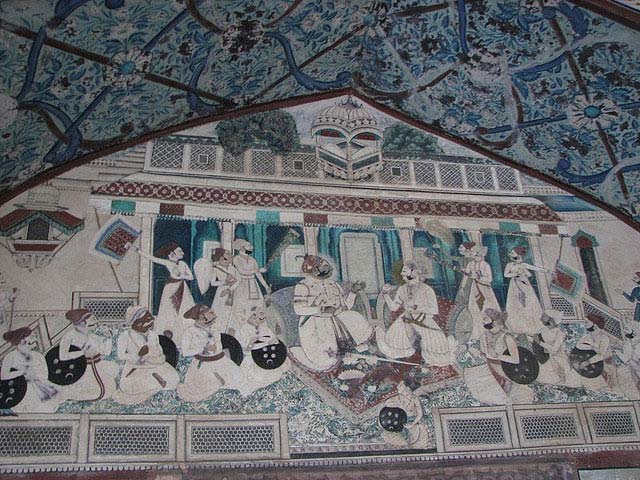 Day 5: Jaipur to Bundi (5h drive)
Today we will drive to the small charming city of Bundi, surrounded by the hills of the Aravalli Range. Bundi is a city you will explore by foot, as no hectic traffic will bother you. Off the beten tracks, you will visit Garh palace with its marvelous paintings and enjoy the fantastic view over the city. From there you can walk up to the Taragarh fort (also called Star Fort). Built in 1354, the Fort offers a fantastic topview down on the city. Don’t to miss the impressive step-wells, and simply enjoy walking trough the narrow streets of this captivating town. Overnight in Bundi.

Day 6: Bundi to Pushkar (4h drive)
This morning your driver will be transfer you to the holly city of Pushkar. Today visit The Brahama Temple which is the only temple in India dedicated to Lord Brahma. This temple is marked by a red spire and over the entrance gateway, there is a beautiful statue of a Hans (goose) - the celestial of Lord Brahma. After walking to the famous Holy Pushkar Lake, sit down and watch hindou people bathing and washing. Also discover the Pushkar Palace, which now servces as a luxury hotel. Overnight in Pushkar.

Day 7: Pushkar to Delhi and Delhi city Tour (7h drive)
Early morning we will drive back to Delhi. You will there visit Old and New Delhi: Red Fort (the large red-colored fort was the residence of the Mughal emperors for nearly 2 centuries, and offers several strucutures that you will visit inside the main building - closed on Mondays), the nearby great Jama Masjid Mosque (built by Mughal emperor Shah Jahan between 1644 and 1656, it is one of the largest Mosques in India), the Chandni Chowk market (one of the oldest and busiest markets in old Delhi), QutbMinar (the 72 meter high monument) and more depending on your interests as you can decide with your driver who knows very well his home town. We will then take you the airport for departure and to your hotel in Delhi.

Pricing for 3 persons based on a triple room.
Pricing for more than 3 persons upon request based on your requirements (number of rooms/cars).
Price change applies during the Pushkar Camel Fair.